During the 10th CMAS Underwater Rugby World Championships that were held in Cali, Colombia from July 26 to August 1, 2015, the US men’s team played against the European powerhouse Sweden. On behalf of USA Underwater Rugby (UWR), Daniel Naujoks conducted an
interview with the Swedish player Jim Nilsson.

USA UWR: Arguably you are the most experienced player on the Swedish team. I  believe that you have played in the impressive number of five world championships thus far. Can you tell us a little about your history in the sport?

Jim Nilsson: Except for a break when
I was a teenager, I have been playing UWR since I was about 10 years old. I am 43 now—that means I have indeed played for some time. I have been very fortunate to have played with the Swedish national team at the highest level since I joined the team in 1997. As you said correctly, I had the privilege of participating in a total of five World Championships. Two of which the Swedish team left as world champions, one with a silver medal, one with bronze, and now, with the fourth place.

We also won two-times gold at a European championships, and a number of Nordic championships – a tournament between Denmark, Finland, Norway, and Sweden that used to be held annually, but now it is organized every other year.

At the club level, I have played with Växjö, Felix (Gothenburg) and Triton (Malmö). And in the time I’ve played, we’ve been three times Swedish champions, and won the Champions Cup twice.

USA UWR: That is a very impressive rugby career that is reserved for few players. Have you had a chance to play against a US team before or was this encounter at the 2015 World Championship the first?

Jim Nilsson:I first met and played the U.S. national team in 2003, I believe, in Copenhagen. Then, you had a lot to learn. But, you did your thing with a high spirit and energy, made good friends with everyone, and have since shown a strong development.

USA UWR:What was your impression of the 2015 US team that you just played in the group phase?

Jim Nilsson: In Cali, the US team we met in the qualifying round was really something unexpected to us. While the final result tells one story, we as a team were quite frustrated after the game. Starting with a feeling that this was going to be a warm-up match for things to come, at the end of the game we all felt that something was not quite right.

USA UWR: Why was that?

Jim Nilsson: Team USA kept playing with furious energy throughout the game –something rarely seen for an underdog team. Really impressive! And your tactics paid off. Playing close to each other, with good passes, and intelligently backing out of tough situations, you made it very hard for us to get hold of the ball and to start playing the way we wanted – an offensive game around your basket. With a better defensive play, this tactic, which in my mind is rule #1 in UWR, and the energy of the team, you’re on a very good trajectory. With a couple of good individual scorers and a bit better defensive play around your own basket, you’ll for sure be in the upper half of the leaderboard at the next World Cup.

USA UWR: What is it that you take out of the game?

Jim Nilsson: As we as a team talked about the game afterwards, we all found it to be a fun game and that we in fact had learned a lot. Not to take things for granted, and that the best games are played against energetic opponents.I and the team really enjoyed playing Team USA and we’re looking forward to meeting you in future championships. Of all teams, I expect the US to amaze the world of underwater rugby the most in the years to come. 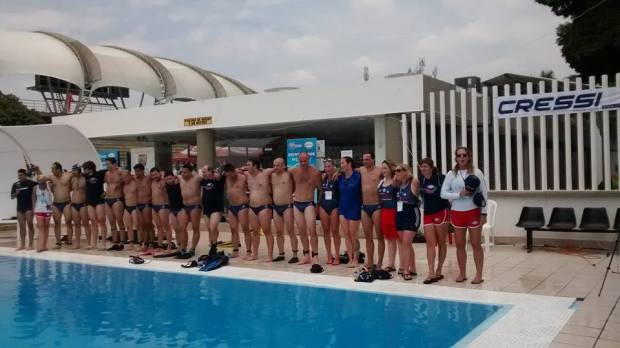